My sister had her first baby recently, and I’m out in Phoenix right now, lending a hand.  I say that a bit loosely since my toddler, Siyona, came along with me, and sometimes I feel like my sister is helping ME more than I help her!

In any case, in a conversation prior to my arrival she expressed some feelings and behaviors that are common among postpartum moms.  She’s constantly fatigued because she’s up every three hours at night breastfeeding.  She tries to make up for the sleep during the day, taking naps whenever her daughter is napping.  Consequently, she doesn’t get out of the house much, and because she’s home alone with her daughter, she often feels lonely and isolated.

As a mom myself, I totally relate to this!  But I also learned through my own experience that sometimes the best thing to do when you’re feeling exhausted is to push back against it, or, as I like to say, to don the “Supermom Cape.” So I decided that one way that I would offer help during my visit was by showing her the special powers that this cape holds.

As it turned out, I found myself needing to lead by example.  Siyona and I arrived in Phoenix from the east coast, three time zones away.  We’ve both been waking up early, but she’s not as content as I am to linger in bed at 4:30 a.m. To make matters worse, I’m nearly seven months pregnant and sleeping poorly throughout the night, plagued by uncomfortable pregnancy symptoms like restless leg syndrome and the constant need to use the bathroom.

I reached for the Supermom Cape when I found myself particularly exhausted one morning. It was 6:15 a.m., and I forced myself into the shower.  I told my sister I was making myself presentable and planning to go out.  I would take Siyona with me and her daughter too if she wanted to lay back down to sleep.  I put on a cute maxi dress, blow dried my hair, and applied make-up.

She rose to the challenge and cleaned herself up too (luckily I packed a spare cape with me, you see).  Downstairs she emerged with styled hair and in her own cute dress. It was nearly 9:30 by the time we all made it out the door, but we were on our way!

We ended up having a lovely morning.  But the real point is this: the moment I made the mental shift – the moment I put on my Supermom Cape – I felt my energy level rise.  I was determined to be capable, to not let the fatigue win.

I was reminded of a time during my first pregnancy when I saw a woman with a newborn on a flight.  She was traveling alone, and she just appeared to have it together.  I passed her as I walked down the aisle of the plane to my seat.  She was sitting nearer to the front, reading a book while her baby fed discreetly and contently under a breastfeeding cover.  I thought to myself, “That’s the mom I want to be.”

And on this morning, I was determined to be the woman on the plane.  And I was.  And so was my sister.  And it felt – if I can be so liberal with the word – empowering.

I don’t put on my cape every day.  In fact, sometimes it’s good to leave it folded neatly in the drawer or hanging in your closet.  Sometimes you really DO need to forgo the shower – even the toothbrush – and just rest any moment you can.  But just don’t let the fatigue win out every time.  Otherwise, you miss out on some great things, like these: 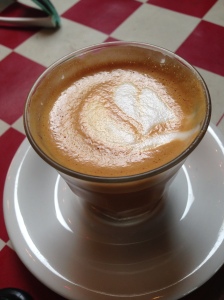 Enjoying an expertly made espresso macchiato (my favorite drink!) at a fantastic Scottsdale coffee shop… 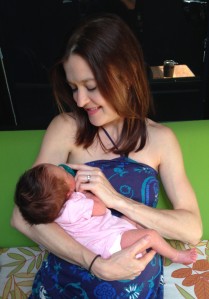 …while looking fabulous and capable, holding my beautiful new niece… 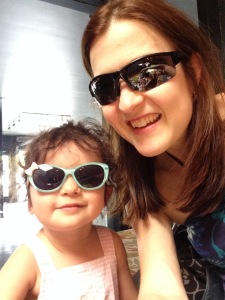 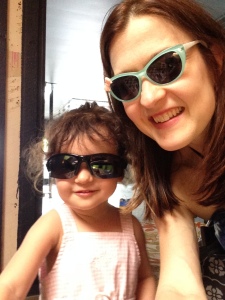 …just before taking goofy selfies with my equally beautiful daughter.

So go for it!  Get your Momcape on!  The world needs more superheroes. 🙂

View all posts by wellmomllc

1 thought on “The Supermom Cape”